You are here: Home / Blog / “Invincible” by Shayne Leighton 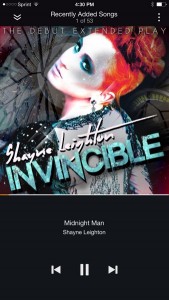 In the “you’ll never know what you’ll find on Strasburg Rocks!” category is this review of an album I purchased last night. 🙂

“Invincible” is Shayne Leighton’s new, debut EP (6 songs). It is titled after her remake of Pat Benatar’s hit of the same name. Now, to start off, I think it is always dangerous to do a remake of a classic song…and especially when that classic version is done by an artist who defined the female side of her genre during the time it was recorded.

But, you know, Shayne pulls it off! Is it as good as Pat’s? That’s an unrealistic question to ask a guy who was a rock-lovin’ hormonal teenager when Pat was in her heyday. 🙂 Instead, I’ll say that Shayne’s version is very good, doing justice to the original. It is a great addition to an EP where all the tracks are strong. 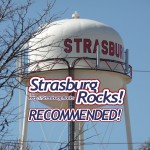 Having said that, it’s not my favorite tune on the album. Instead that award goes to “Midnight Man,” the fourth track. That song is so good I basically had it on repeat half the time I was mowing the back lawn this afternoon. It’s a catchy work that speaks to how desire and temptation combined with rationalization can lead us to doing what we know is wrong. Maybe that wasn’t the author’s intent…but that’s the message I heard. 🙂

I highly recommend purchasing this EP (Amazon Music | iTunes | Spotify). I give it 4 bulls (out of 5). In case that seems low…with music it is near impossible for me to give 5 bulls. I grew up when groups like Led Zeppelin and Queen were ruling the rock music scene, and 4 bulls is as much or more than I would rate some recent releases from my favorite bands. Four means it is really good.

Great work Shayne! I look forward to seeing what your future holds, both for you and my listening ears! 🙂

You can check out the album’s title song below:

And here is Pat Benatar’s version: