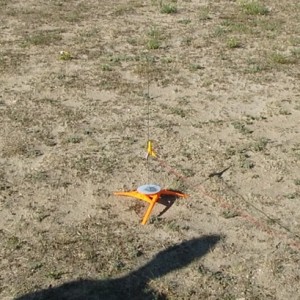 As promised, below is a video from yesterday’s Strasburg Rocks! Rocket Club rocket launches. Sadly, we had two casualties…

The Estes Galaxy Gold (first rocket fired off) popped its bottom off when the charge for the parachute exploded. With a little glue to make it whole, the Galaxy Gold will start retirement after a short career (this one flight).  Also…and I didn’t get a video of it (operator error on my part)…but the Estes Mosquito was never found (it is what is pictured on the launchpad in this post). My friend Leo and I watched its flight very closely, but never saw it return to earth. I suppose it is more M.I.A. then R.I.P. 🙂

The Estes Mosquito is a classic rocket…basically a way to stick fins to an engine. 🙂 I’m sure we’ll buy another one.

It wasn’t all bad news (and the Galaxy Gold’s flight was kind of cool even with its permanent injury); the Estes Summit and the Galaxy Planet Probe both returned to earth unharmed. The Planet Probe is the last one in the video…it’s become one of my favorites. (It is meant to use an engine without a parachute charge, but I didn’t have any…so as it approaches the ground you’ll see the Estes C6-5 engine suddenly slow it down a tiny bit.) Without further ado, the video:

Finally, a day that includes rocket launches is already awesome, but afterward we got to see an airplane (multiple times) land and take off basically in Leo’s backyard. A real plane, not a model one. 🙂

You can see it here.

Hope you all had a great weekend too!