You are here: Home / Life in Strasburg / I Didn’t Crash It the First Day! 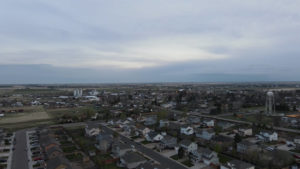 Okay, I’m sold. Well, I was sold before, since I already bought the DJI Mavic Air 2. 🙂

I never flew a drone before today, and this is like the second or third flight…once I got to play with it after work and dinner.

Initially I just wanted to record the sundown (since we have houses blocking our western view)…but it quickly became clear that wouldn’t be an exciting video…so then I tested moving it around, going higher, etc.

Probably still mostly a practice video, but still kind of cool…if I do say so myself. 🙂

Update: Or the second day:

It was really windy, so my bravery with the drone was reduced. What is amazing is that the jerkiness here and there is all on me as I’m trying things. The DJI handles the video in a way that strong wind is imperceptible.

Of course, it has its limits. 🙂